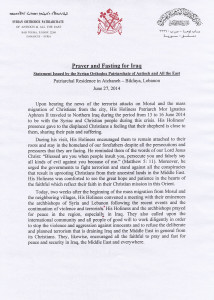 Upon hearing the news of the terrorist attacks on Mosul and the mass migration of Christians from the city, His Holiness Patriarch Mor Ignatius Aphrem II traveled to Northern Iraq during the period from 13 to 16 June 2014 to be with the Syriac and Christian people during this crisis. His Holiness’ presence gave to the displaced Christians a feeling that their shepherd is close to them, sharing their pain and suffering.

During his visit, His Holiness encouraged them to remain attached to their roots and stay in the homeland of our forefathers despite all the persecutions and pressures that they are facing. He reminded them of the words of our Lord Jesus Christ: “Blessed are you when people insult you, persecute you and falsely say all kinds of evil against you because of me.” (Matthew 5: 11). Moreover, he urged the governments to fight terrorism and stand against all the conspiracies that result in uprooting Christians from their ancestral lands in the Middle East. His Holiness was comforted to see the great hope and patience in the hearts of the faithful which reflect their faith in their Christian mission in this Orient.

Today, two weeks after the beginning of the mass migration from Mosul and the neighboring villages, His Holiness convened a meeting with their eminences the archbishops of Syria and Lebanon following the recent events and the continuation of violence and terrorism. His Holiness and the archbishops prayed for peace in the region, especially in Iraq. They also called upon the international community and all people of good will to work diligently in order to stop the violence and aggression against innocents and to refuse the deliberate and planned terrorism that is draining Iraq and the Middle East in general from its Christians. They, likewise, encouraged all the faithful to pray and fast for peace and security in Iraq, the Middle East and everywhere.