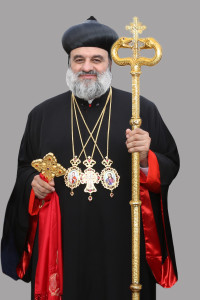 He entered St. Aphrem Theological Seminary in Atchaneh – Lebanon, in 1977, after completing his primary schooling in Qamishly.

Starting in 1982, the young Aphrem served at the Syriac Orthodox Archdiocese of Aleppo, Syria, for two years under the guidance of His Eminence Mor Gregorios Yuhanna Ibrahim.

From 1984 to 1988, he pursued his theological studies at the Coptic Theological Seminary in Cairo, graduating with a BA Degree of Divinity.

In 1985, he took the vows of a monk, submitting himself in the service of the Church and was ordained to the diaconate in Egypt, and later that same year, to the sacred priesthood in Qamishly. From 1988 to 1989, the monk-priest Aphrem served as both the secretary of the late Patriarch Mor Ignatius Zakka I Iwas and as a teacher at St. Aphrem Theological Seminary in Damascus, Syria.

In 1991, he entered St. Patrick’s College in Maynooth, Ireland, where he received a License of Sacred Theology in 1992, and a Doctor of Divinity Degree in 1994, following the defense of his doctoral thesis on Symbolism of the Cross in Early Syriac Christianity. During that time, he also served as the vicar of our Syriac Orthodox Church in London.

On Sunday, January 28, 1996, the monk-priest Aphrem was consecrated as Archbishop under the episcopal name ‘Mor Cyril’ and became the Patriarchal Vicar of the Archdiocese of the Syriac Orthodox Church for the Eastern USA.

Mor Cyril Aphrem Karim arrived in the United States of America on March 2nd, 1996, and was officially installed to his position at St. Mark’s Cathedral in Teaneck, New Jersey.

Within a year as an Archbishop, he gathered the youth of the archdiocese and was instrumental in establishing an Archdiocesan Scholarship Program to benefit students. During his tenure, he established a number of new parishes in the Archdiocese in Washington DC, Florida, New Jersey, Atlanta, Indiana, Virginia, Indiana and Texas.

Mor Cyril established himself as an ecumenist, very much concerned about Christian Unity. He has served on both the Executive and Central Committees of the World Council of Churches, attending the 1991 Canberra, Australia WCC General Assembly, the 1998 WCC General Assembly in Harare, Zimbabwe and the 2006 Assembly of Porto Alegre, Brazil, as a member of the Syriac Orthodox Church delegation.

Moreover, he was an active member of the Executive and Governing Boards of the National Council of Churches of Christ in the USA, and he served as Vice-Chairman of the Standing Conference of the Oriental Orthodox Churches in America.

Archbishop Aphrem Karim played an important role in the establishment of a new and promising ecumenical body, Christian Churches Together in the USA, of which the Syriac Orthodox Church is a founding member.

In 2013, he enrolled at Fordham University in New York for a PhD in religious education.

On March 31, 2014, following the passing away of Patriarch Mor Ignatius Zakka I Iwas, the Holy Synod of the Syriac Orthodox Church of Antioch convened and the Fathers of the Synod elected Mor Cyril Aphrem as Patriarch of Antioch and All the East and Supreme Head of the Universal Syriac Orthodox Church, giving him the name Mor Ignatius Aphrem II. He is the 122nd successor of St. Peter in the Apostolic See of Antioch. He was enthroned in Damascus, Syria, on May 29, 2014.

His Holiness made many apostolic visits since his enthronement. We mention the following:

Following his enthronement, His Holiness presided over a universal synod which included His Beatitude Catholicose Mor Baselius Thomas I, and the archbishops and metropolitans of the Universal Syriac Orthodox Church.

In June 2015, he presided over the Holy Synod at Mor Aphrem Monastery in Maarat Saydnaya. He also consecrated the Holy Myron on the occasion of the centennial of the Syriac Genocide Sayfo.

His Holiness paid a special official visit to Armenia where he was the guest of the Armenian Apostolic Church and the Republic of Armenia.

He also visited the Vatican and met with His Holiness Pope Francis.

He paid an official visit to the Russian Orthodox Church and Russia where he met His Holiness Patriarch Kyrill, and the Russian Minister for Foreign Affairs Mr. Sergey Lavrov.

On various occasions, he held meetings with religious leaders, patriarchs, and others on the level of the Middle East and internationally.