Centennial Commemoration of the “Sayfo” Genocide 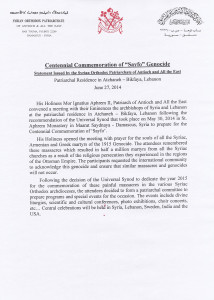 His Holiness Mor Ignatius Aphrem II, Patriarch of Antioch and All the East convened a meeting with their Eminences the archbishops of Syria and Lebanon at the patriarchal residence in Atchaneh – Bikfaya, Lebanon following the recommendation of the Universal Synod that took place on May 30, 2014 in St. Aphrem Monastery in Maarat Saydnaya – Damascus, Syria to prepare for the Centennial Commemoration of ‘Sayfo’.

His Holiness opened the meeting with prayer for the souls of all the Syriac, Armenian and Greek martyrs of the 1915 Genocide. The attendees remembered these massacres which resulted in half a million martyrs from all the Syriac churches as a result of the religious persecution they experienced in the regions of the Ottoman Empire. The participants requested the international community to acknowledge this genocide and ensure that similar massacres and genocides will not occur.

Following the decision of the Universal Synod to dedicate the year 2015 for the commemoration of these painful massacres in the various Syriac Orthodox archdioceses, the attendees decided to form a patriarchal committee to prepare programs and special events for the occasion. The events include divine liturgies, scientific and cultural conferences, photo exhibitions, choir concerts, etc… Central celebrations will be held in Syria, Lebanon, Sweden, India and the USA.