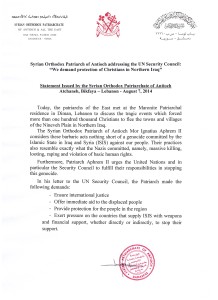 Statement Issued by the Syrian Orthodox Patriarchate of Antioch

Today, the patriarchs of the East met at the Maronite Patriarchal residence in Diman, Lebanon to discuss the tragic events which forced more than one hundred thousand Christians to flee the towns and villages of the Nineveh Plain in Northern Iraq.

The Syrian Orthodox Patriarch of Antioch Mor Ignatius Aphrem II considers these barbaric acts nothing short of a genocide committed by the Islamic State in Iraq and Syria (ISIS) against our people. Their practices also resemble exactly what the Nazis committed, namely, massive killing, looting, raping and violation of basic human rights.

Furthermore, Patriarch Aphrem II urges the United Nations and in particular the Security Council to fulfill their responsibilities in stopping this genocide.

In his letter to the UN Security Council, the Patriarch made the following demands: