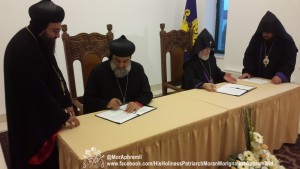 We, KAREKIN II, Supreme Patriarch and Catholicos of All Armenians, and Mor Ignatius Aphrem II, Patriarch of Antioch and All the East and Supreme Head of the Universal Syriac Orthodox Church, offer thanksgiving to the Holy Trinity: Father, Son, and Holy Spirit, for providing us the opportunity to meet in the spiritual center of all Armenians, the Mother See of Holy Etchmiadzin by the fraternal invitation of the Catholicos of All Armenians, to affirm the unity of faith, and the willful desire for cooperation between the two sister Churches.

The Armenian and Syriac Orthodox sister Churches, founded by the Apostles, share the same Christology and Apostolic Tradition, patristic heritage and common saints, confessors and witnesses. We are happy to acknowledge that today as well the historical relations between our two churches are developing closer.

In this fast changing world our Churches are facing new challenges in our pastoral life. We place great importance upon the development of our bilateral relations in the areas of spiritual and theological education, pastoral life and promotion of monasticism. We encourage the representatives of our Churches to continue their cooperative efforts on the diocesan levels.

We are greatly concerned with the situation in the Middle East. Today the countries of the Middle East, which are the birthplace of the monotheist religions and where representatives of different religions have lived and worked side by side for centuries, are going through major crisis. We strongly condemn the activities of all terrorist groups and religious extremists, and all violence committed against Christian, Muslims, Yazidi people and other minorities. We are hopeful that the war on terror in Iraq and Syria will succeed in establishing peace in the region, so that those who were forced into exile may return to their homes

We also express our concern for the continuing war in Syria. Once again we call upon the international community to respect the will of the Syrian people to solve their own political problems and dissensions strictly by peaceful means. We urge and pray for the immediate release of two kidnapped archbishops Mor Gregorios Youhanna Ibrahim and Boulos Yazigi. We are hopeful that the international community will continue to provide humanitarian aid to the region, whether it be of a financial, medical or other nature helpful to human life, and remove all obstacles in the way of humanitarian assistance.

One hundred years have passed since the beginning of the First World War which caused so much destruction and human misfortune. Different nations and governments of the world remember the evils of mankind and recall the events which brought about irreversible losses. The war brought about painful consequences for the Armenians who lost one and a half million of their people and a great part of their land and Syriacs who have lost more than five hundred thousand of their population. We offer prayers for Armenian and Syriac martyrs as well as other victims of World War I. We invite the entire Christian world to unite in prayer at the Armenian Genocide and the Syriac Sayfo centennial commemorative events in 2015. We call upon the civilized world to recognize and condemn the crimes committed against the Armenian and Syriac peoples as well as other Christian communities.

We give thanks to God Almighty for the existing cooperation between the Oriental Orthodox Churches, which share the same faith. We happily acknowledge that our Church family engages in the ecumenical movement and in dialogues with the other churches and Christian communities. In these new historical realities the theological dialogues must contribute to the common witness of the Church of Christ in the changing world. We are pleased that the bilateral and multilateral relations are progressing with representatives of other religions and inter-religious organizations, for the peace in the world as well as for the wellbeing and prosperity of humankind.

We pray to God for the splendor of the Churches, and for peace on earth and especially in the Middle East, asking that the Lord will soon grant peace and a undisturbed life to the people of Syria.