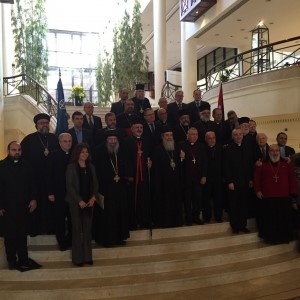 On January 22-23, 2015, the Executive Committee of the Middle East Council of Churches (MECC) held a meeting in Jordan. Their Eminences Mor Theophilus George Saliba Archbishop of Mount Lebanon and Tripoli and General Secretary of the Holy Synod, Mor Justinus Boulos Safar Patriarchal Vicar in Zahleh and Beqaa, Mor Clemis Daniel Kourieh Metropolitan of Beirut and Rev. Dn. Jimmy Danho Associate Secretary of MECC for the Oriental Orthodox Family participated in the meeting.
The meeting was presided over by: His Beatitude Patriarch Theophilos III Patriarch of Jerusalem of Palestine and Jordan, His Beatitude Mor Ignatius Youssef III Younan, Syriac Catholic Patriarch of Antioch, His Grace Bishop Mounib Younan Head of the Lutheran Evangelical Church in the Holy Land and Rev. Fr. Michel Jalkh General Secretary of MECC.
At the end of the meeting, the following statement was issued:

The Executive Committee of the Middle East Council of Churches concluded yesterday its meetings at Christ’s Baptism Site on the eastern bank of the Jordan River. The meetings were hosted by H.B. Patriarch Theophilos III, Patriarch of Jerusalem of Palestine and Jordan – head of the Orthodox Family in the Council.

In addition to H.B. Patriarch Theophilus, the heads of the Council: H.B. Patriarch Mar Ignatius Joseph III Younan – Syriac Catholic Patriarch of Antioch, H.E. Bishop Munib Younan, head of the Evangelical Lutheran Church in Jordan and the Holy Land, and the Secretary General of the Council Father Michel Jalach participated in the meetings of the Executive Committee.

The Executive Committee of the Middle East Council of Churches opened its closing Statement with thanks and gratitude to the officials in the Hashemite Kingdom of Jordan for their interest in the affairs of the Council, and expressed its appreciating of the role of His Majesty King Abdullah II Bin Al Hussein for the sake of peace, dissemination of moderation and the protection of religious freedom enjoyed by citizens of the kingdom.

The Committee discussed during its meetings the report of the Secretary-General Father Michel Jalach, which contained details of the achievements of the Secretariat during the past term, the Committee also discussed strategy and made a number of appropriate decisions in order to enhance the Council’s activities in the coming period.

Committee members stressed that the Council is the institution that brings Christians of the Orient together and it expresses their concerns and aspirations. The Executive Committee decided to set up a specialized body to provide relief aid to Christians and Muslims displaced from Iraq and Syria that are currently living in tragic circumstances away from home. This decision came after the committee reviewed the conditions of the displaced and studied ways to assist them.

Furthermore, the Committee called upon international institutions to speed up the process of distributing aid to the displaced people given the worsening conditions they undergo, especially Christians in Iraq and Syria who are witness to the spread of an unprecedented wave of terrorism and violence in the history of the Middle East resulting in death, destruction, and displacement. On the other hand, the Committee thanked donor organizations for aid they provide to the displaced.

The Committee condemned, on behalf Middle East Council of Churches terrorist acts inflicted upon innocent people because of their Christian faith, and attempts to uproot them from their land in the Ninawah Plains, along with other minorities. The Committee considered these brutal crimes afar from religious and moral teachings that call for love, tolerance and acceptance of others. On the Other hand the Committee acknowledged Islamic religious and political authorities that work for sake of human values.

The Committee stressed the call for the release of the kidnapped Bishops Paul Yazigi and Yohanna Abraham: “Two years have passed since this heinous crime was committed,” urging the international authorities to intensify efforts to release the kidnapped as the Council members pray for their safe return soon.

The Committee acknowledged first centenary anniversary of the massacres of Armenians and Assyrians, which coincides with this year. The Executive Committee of the Middle East Council of Churches condemned the massacres, and announced that it will be organizing a seminar and a memorial prayer to comfort the souls of the martyrs of these genocidal massacres, and called for the intensification of participation in other activities that are held on the occasion.

Regarding violence in the Middle East, the Committee stressed the need for dialogue between conflicting parties, and confirmed that political solution is the only and best way to stop the violence in these countries. The Committee demanded a halt to supplying fighters with weapons.
The Committee also condemned on behalf Middle East Council of Churches, the continuing aggression against Palestinians in the occupied territories, and urged the resumption of dialogue between the parties to the conflict in order to achieve an independent Palestinian state with Jerusalem as its capital.

The Executive Committee ended its statement by saying, “The Executive Committee … is hopeful that peacemakers’ efforts will be consolidated in the Arab region and the world, since religion is an attribution to peace and not a quarrel factor, and that everyone can live in peace based on justice, human rights and the values of citizenship and equality.”
Amman 23/01/2015