His Holiness Participates in the Enthronement of the New Assyrian Patriarch 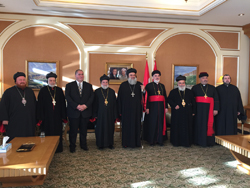 His Holiness and the accompanying delegation were received by their Eminences Mar Awa Royel and Mar Paulus Benjamin at the Hall of Honor at Erbil Airport. Their Eminences Mor Gregorius Saliba Shemoun, Patriarchal Counselor, Mor Timotheos Moussa Al-Shamani, Archbishop of the Archdiocese of Mor Matta Monastery, and Mor Nicodemus Daoud Sharaf, Metropolitan of Mosul, Kurdistan and Environs were also present at the arrival of His Holiness.

On Sunday September 27, 2015, His Holiness and the accompanying delegation participated in the Enthronement ceremony of the new Assyrian Patriarch Mar Gewargis III Slewa, at St. John the Baptist Church in Erbil. The ceremony was conducted by the Locum Tenens Metropolitan Mar Aprem. The new Patriarch delivered his enthronement speech in which he expressed his readiness to collaborate with the other churches, especially the Churches that use the same language. He also spoke about the need to work together as Christians in the Middle East, and have a common stand against the persecutions and terrorist attacks that surround us.

The enthronement was attended by His Eminence Cardinal Kurt Koch, President of the Pontifical Council for Promoting Christian Unity, and His Beatitude Chaldean Patriarch Mar Louis Sako.