Annual Dinner of the Syriac League in Lebanon 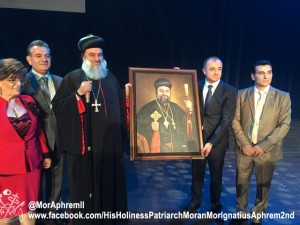 His Holiness delivered a speech on the occasion saying: “the Middle East storms with violence and danger. This drives Christians to leave their countries, forced to seek refuge and security elsewhere. They left North of Iraq, namely Mosul and the villages of the Plain of Nineveh, to go to societies in the West that make use of their energy and creativity as well as their accumulated knowledge and experience”. He added that despite the persecutions and suffering that Christians undergo and the destruction of religious sites, we are still holding firm to our faith in Jesus Christ.

He also spoke about the role of the Syriacs in Lebanon, for they are a core component of the Lebanese society, in spite of the injustice that we face in sharing the adequate political role and positions because of the sectarian structure of Lebanese Politics. He incited thus Lebanese Christian political leaders to assume their responsibilities and elect a President for the Republic, in order to save the country from the current crisis and preserve their role.

During the dinner, paintings by Artist Gabriella Murr were exhibited and the Syriac League in Lebanon offered a Portrait painting to His Holiness, thanking him for his support.