Ceremony in Honor of Syrian Athletes 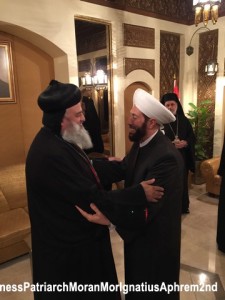 On the occasion of the 42nd anniversary of the October Liberation War, a Ceremony in the Honor of Syrian Athletes was organized at Sheraton Hotel in Damascus.

His Holiness Patriarch Moran Mor Ignatius Aphrem II attended this special ceremony. His Excellency the Grand Mufti of the Syrian Arab Republic Dr. Ahmad Badreddine Hassoun, Head of the Youth Department in the Baath Party Dr. Ammar Saati, Minister of Administrative Development Dr. Hassan Nouri, Political and Media Counselor at the Presidential Palace Dr. Buthayna Shaaban, as well as many political, sportive and social dignitaries attended this ceremony.
In his speech, His Holiness spoke about the importance of this honoring event which reminds us of the role that the athletes played in preserving the unity of Syria. He said that the honoring is for every Syrian who is struggling against the attacks against Syria.

He added that the terrorists that are acting in Syria do not relay to humanity because they are destroying the historical monuments and archeological sites, and killing human beings.