Reception in Honor of His Holiness at Staten Island 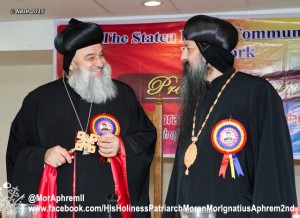 His Grace Coptic Orthodox Bishop David welcomed His Holiness and thanked him for his herculean efforts to present the suffering and persecutions of Christians in the Middle East to the international community in the hope that they would help stop the persecutions and end the suffering of innocents. He added that since his enthronement, Patriarch Aphrem II has been tending to the spiritual and material needs of his imperiled flock, visiting them in the most dangerous parts of Iraq and Syria on numerous occasions, including in recent months. Additionally, His Holiness has been traveling all over Europe and North America advocating not only for the Syriac Orthodox Church, but for all of the beleaguered Christians of the Middle East. Furthermore, His Holiness has been seeing to the growth and theological education of his flock, consecrating numerous churches and inaugurating the new Syriac Theological Seminary in Salzburg, Austria.

His Holiness thanked the organizers of this reception and blessed all those who were present.