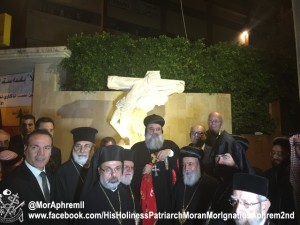 His Holiness Patriarch Mor Ignatius Aphrem II inaugurated a new monument for the Centennial Commemoration of the Syriac Genocide ‘Sayfo’ at the Tarakki Syriac School in Bourj Hammoud, Lebanon. The Syriac League in Lebanon organized and sponsored this event.

Upon arrival to Tarakki School, His Holiness was welcomed by His Eminence Mor Theophilus Georges Saliba, Archbishop of Mount Lebanon and Tripoli, and the clergy of the Archdiocese. Mr. Habib Afram, President of the Syriac League in Lebanon, welcomed His Holiness and spoke about the modern contemporary Sayfo that Christians are experiencing in the Middle East.

His Holiness spoke about the current situation and how similar it is to what our forefathers experienced during Sayfo. He pointed out that it is necessary to unify the efforts to fight the evil powers that desire to put an end to the Christian presence in the Middle East.