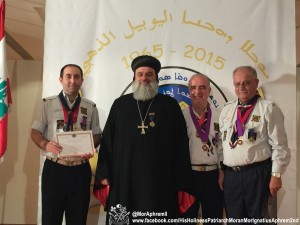 Under the auspices of His Holiness Patriarch Mor Ignatius Aphrem II, the Syriac Lebanese Scouts of Mount Lebanon celebrated their Golden Jubilee at the Municipality Hall in Jdeideh.

His Holiness was received by the Scouts band and the chiefs of the Scout Chapter.

He was given the Medal of the Golden Jubilee by the Head of the International Syriac Scouts Mr. Assaad Charro who thanked His Holiness for his constant support for the scouts.

Chief Jean Barley, Head of the Syriac Lebanese Scouts in Mount Lebanon, welcomed His Holiness and the accompanying archbishops and clergy.

His Holiness thanked the scouts for their important role in offering civic education to the youth of the Syriac Orthodox Church, developing their skills and using their energy to produce fruitful deeds.

The celebration was attended by their Eminences: Mor Theophilus Georges Saliba, Archbishop of Mount Lebanon and Tripoli, Mor Justinus Boulos Safar, Archbishop of Zahleh and Beqaa, Mor Clemis Daniel Kourieh, Metropolitan of Beirut, Mor Chrysostomos Mikhael Shemoun, Patriarchal Vicar in the Patriarchal Benevolent Institutions in Atchaneh, and Mor Timotheos Matthew, Patriarchal Secretary for Indian Affairs, as well as monks and clergy from the dioceses of Lebanon.