Visit of the Honorary Consul of Ireland in Syria 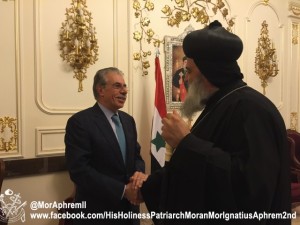 His Holiness discussed with His Excellency the current situation in Syria and the Middle East. . In particular, they discussed the destruction of the infrastructure resulting from the current crisis and conflicts, as well as the forced migration of civilians due to attacks of terrorists.