Visit to the Archbishop of Salzburg 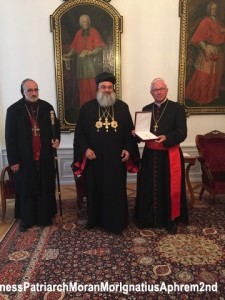 His Holiness presented His Excellency with a gift, a ‘Syriac Cross’, as a sign of friendship and appreciation. His Holiness also thanked the Archbishop for all the help and assistance that he has offered to our community in Salzburg, particularly on the academic level.

In his welcoming speech, His Excellency Archbishop Lackner recalled the great collaboration that his predecessor Archbishop Dr. Alois Kothgasser and the Late Lamented Patriarch Mor Ignatius Zakka I Iwas. Archbishop Lackner hoped that this collaboration will remain and continue, especially with the inauguration of the new Beth Suryoye, the new Syriac Theological Seminary in Salzburg.

In turn, His Holiness expressed his joy at the level that the relationship between the Syriac Orthodox Church and the Catholic Church in Salzburg has reached. He thanked the Lord for the great opportunity to have a Syriac Seminary at the heart of Europe, in Salzburg. He also hoped to further develop the relations between the two churches and to exchange expertise and academic knowledge in the benefit of all.