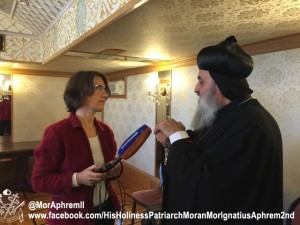 On his first official visit to the Russian Orthodox Church and the Russian Federal Republic, His Holiness Patriarch Mor Ignatius Aphrem II answered the questions of journalists in a press conference upon his arrival to Moscow.
Most questions inquired about the current situation of Christians in the Middle East. His Holiness called for the countries of the West to support Christians and help them remain in their homeland.
His Holiness also called to stop indirect financing of terrorist groups that are destroying towns and cities in Syria, depriving its citizens from peace and safety.
On questions regarding emigration to Europe and the crisis of the refugees, His Holiness called European countries to help as much as they can the refugees that reach them, once they reach them, specifying that the Church does not encourage such exodus and advocates that Christians should remain in the Middle East.
He thanked the Russian people for all the help and support they are showing to the Syrian people.
The official delegation accompanying His Holiness includes: Mor Severius Hawa, Archbishop of Baghdad and Basra, Mor Philoxenus Yusuf Cetin, Patriarchal Vicar in Istanbul and Ankara, Mor Dionysius Jean Kawak, Patriarchal Assistant, Mor Nicodemus Daoud Sharaf, Archbishop of Mosul, Kurdistan and Environs, Very Rev. Raban Joseph Bali, Patriarchal Secretary and Media Office Director and Very Rev. Raban Roger-Youssef Akhrass, Director of Syriac Studies.