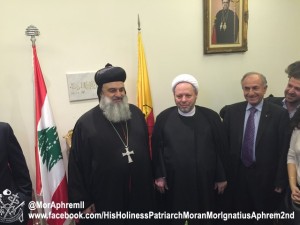 His Eminence Mor Clemis Daniel Kourieh, Metropolitan of Beirut, assisted him in the Holy Qurobo which was attended by their Eminences Mor Severius Hawa, Metropolitan of Baghdad and Basra, Mor Philoxenus Matta Chamoun, Mor Theophilus Georges Saliba, Archbishop of Mount Lebanon and Tripoli, Mor Justinus Boulos Safar, Patriarchal Vicar in Zahleh and Beqaa, Mor Chrysostomos Mikhael Shemoun, Patriarchal Vicar in the Patriarchal Benevolent Institutions in Atchaneh and His Grace Mor Maurice Amsih, Director of Public Relations at the Patriarchate as well as clergy and faithful from the Archdiocese.

In his sermon, His Holiness thanked all for this warm welcome and expressed his joy to meet the faithful of this parish. He added that the Syriac people exist in Lebanon since thousands of years, especially after seeking refuge in it after the 1915 Genocide Sayfo. He said that “Lebanon is a heavenly light that shines in this Orient” pointing out to the difficult circumstances that Christians from the East are going through. He also hoped that Lebanon will remain a house for those who seek it.

After the Holy Qurobo, His Holiness unveiled and consecrated the mosaic of the Centenial Commemoration of Sayfo, where he lit the torch and prayed the service of the martyrs.

Afterwards, His Holiness met the official delegations and the faithful who came to receive his blessings at Qenshrin Hall.