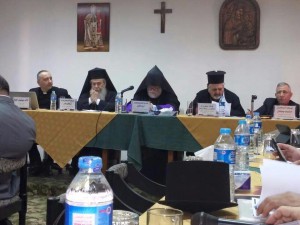 The Executive Committee of the Middle East Council of Churches (MECC) convened at St. Mark Patriarchal Center in Cairo City, Egypt. The meeting was hosted by the Coptic Orthodox Patriarchate between 2 and 5 November 2015.

Their Eminences Mor Theophilus George Saliba, Archbishop of Mount Lebanon and Tripoli, and Mor Clemis Daniel Kourieh, Metropolitan of Beirut represented our Syriac Orthodox Church in their capacities as members of the Executive Committee. Rev. Fr. Jimmy Danho participated as the Associate Secretary of MECC for the Oriental Orthodox Family.

The meeting was opened with the report of the General Secretary. The members then discussed the new policies of the Council’s administration as well as the projects that it undertook in the different areas, especially in relation to ecumenical relations and the Christian presence in the Middle East.

The participants then discussed the dates of the General Assembly.

Other programs and projects were evaluated and new timelines were adopted as well as new ways of collaboration with other partner organizations and institutions.