Meeting with Head of Foreign Affairs Committee at State Douma 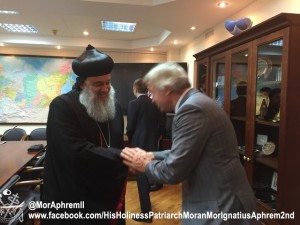 During the meeting, His Holiness expressed to Mr. Pushkov the appreciation and thanks of the Syrian people for the Russian intervention in Syria as well as the humanitarian support that the Russian government and people are offering.

His Holiness discussed the situation of Christians in the Middle East, especially in Syria and Iraq. He explained to Mr. Pushkov the reality in which Christians in Northern Iraq were forced to leave their houses and seek refuge in the region of Iraqi Kurdistan. Furthermore, he describes the conditions of Christians in Syria, especially in the light of his recent visit to Sadad where he met the faithful who defended the town from terrorist attempts to seize it.

Mr. Pushkov expressed the Russian resolve to continue their support to Syria and all Christians in the Middle East. He also discussed ways of channeling humanitarian aid from Russia to the needy in Syria and Iraq through the Syriac Orthodox Patriarchate.