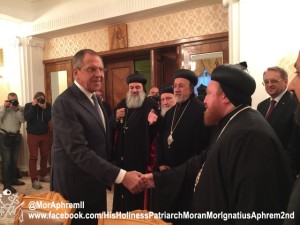 Mr. Sergey Lavrov pointed out that the Russian government is interested in making contacts with the religious leaders in the Middle East. He also expressed his concerns about the situation in Syria and his care to help Christians throughout the Middle East. He mentioned the role of Russia in advocating for the UN resolution on Human Rights in March 2015.

His Holiness Patriarch Aphrem II thanked the Russian government as well as the Russian Orthodox Church for their help in easing the suffering of the Syrian people and through their intervention in Syria. Moreover, he thanked Russia for its continuous efforts to fight terrorism internationally.

His Holiness brought the issue of the abduction of Metropolitan Youhanna Ibrahim and Boulos Yaziji to the attention of Mr. Lavrov, asking him to continue his support in this matter.