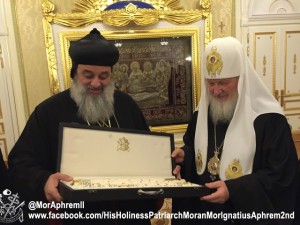 The two pontiffs expressed their joy to hold this historical meeting together.
They discussed many current issues related to the persecution of Christians in the Middle East and the role of the Russian Orthodox Church in defending them and carrying their concerns to the international fora. They also discussed ways of deepening the relations between the two sister churches and strengthening their common stand against terrorism and war.

Patriarch Kyrill spoke about the first encounters of Russians with Syriac Christians in earlier centuries when Russian pilgrims visited Syria and Palestine to receive the blessings of the Holy Land. He highlighted the importance of preserving the Christian presence in the Middle East.

His Holiness Patriarch Aphrem II thanked Patriarch Kyrill for his constant support for the just cause of the Christians everywhere, especially the Russian intervention in Syria. He also appreciated all the help that Patriarch Kyrill showed in the case of the abducted Archbishops of Aleppo, Mor Gregorius Youhanna Ibrahim and Boulos Yaziji, and asked him to renew the efforts to have them released in the soonest.

He said: “We come to you from Damascus, the oldest inhabited capital in the world, the city of St. Paul, St. Ananias and many great apostles and saints of the Church. We come to you bringing with us the pains of the Syrian people but also their aspirations and hopes. We are suffering because of terrorism and extremism that is brought to our countries; the Christian presence is endangered.” He added that this is not the first time that Christians in that area seek the help of Russia; during Sayfo in 1915, many families also sought refuge in Russia escaping the genocide. He thanked His Holiness Patriarch Kirill for the letter he sent to President Obama in 2013 about the situation in Syria and the Christian presence at threat of complete annihilation there.

His Holiness spoke about the numerous monasteries, churches and religious sites that were destroyed in Syria by terrorist attacks. He observed that the men of Sadad, the Christian Syrian town which he visited a week earlier, have started to defend themselves against ISIS and terrorist activities. This shall bring new hope to the people to remain in their homeland.

The two pontiffs also discussed prospects of cooperation, especially on the academic level, between the Russian Orthodox Church and the Syriac Orthodox Church.