Official Receptions for His Holiness in Beirut 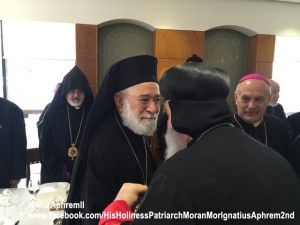 His Holiness also presided over the evening prayer (Ramsho) at St. Peter and St. Paul Cathedral in Msaytbeh.

After blessing the faithful in the church, His Holiness met with the different associations and societies that work in the Archdiocese of Beirut in the presence of His Eminence Mor Clemis Daniel Kourieh, Metropolitan of Beirut.

Finally, His Holiness met with the members of the Archdiocesan Council who gave a full report on the different endowments in the Archdiocese as well as the institutions that belong to it.

A formal Gala dinner was given at the reception held in honor of His Holiness at the Four Seasons Hotel. It was attended by many politicians, officials and other dignitaries from Beirut.