SAYFO – Symphony of Classical Music in Commemoration of the Syriac Genocide 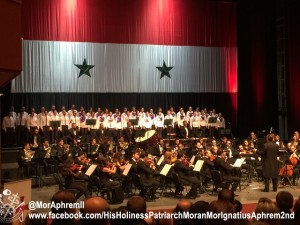 Under the auspices of the Syrian Ministry of Culture, Dar Al-Assad hosted the Sayfo Symphony, composed by the young Syriac Thomas Ucel. It is a contribution to the many efforts and hard work spent to remember the martyrs of the Syriac Genocide alive and to remind the world of what happened to our ancestors in the near past, 100 years ago.

The Symphony “Sayfo” was preceded by the performance of St. Aphrem Patriarchal Choir led by Mr. Shady Sarweh, who chanted Syriac religious and folkloric songs. The performance lasted 30 mins followed by the symphony which was performed by the Syrian National Philharmonic led by Mr. Andre Maalouli.
At the end of the symphony, His Holiness Patriarch Aphrem II gave honorary shields to the General Director of Dar Al-Assad, the Director of the Syrian Philharmonic, the Director of St. Aphrem Patriarchal Choir and the composer Thomas Ucel.
His Holiness also spoke about the history of the massacres and the genocide. He stated that we can make the victories of our Forefathers immortal through music. We can thus learn from our past, especially when we are currently witnessing conditions similar to what our ancestors lived during Sayfo.