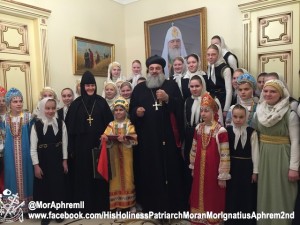 During his official visit to Russia, His Holiness Patriarch Mor Ignatius Aphrem II visited the Novospass (New Savior) Monastery in Moscow where he was welcomed by the Residing Metropolitan in the main church. His Holiness thanked the Lord for the opportunity to visit this historical monastery and spoke to the monks about the importance of prayer and the role of monks in preserving the spiritual heritage transmitted to us from the saints and Fathers of the Church.

His Holiness then visited Pokrovsky Monastery where the tomb of St. Matrona lays. He was welcomed by the Mother Superior who gave him an overview of the history of the monastery and the changes it had during the reign of the communist party in Russia. She also showed His Holiness and the accompanying delegation the different parts and institutions of the monastery.

The orphans who live in the monastery chanted Russian religious hymns and national songs.

At. St. Cyril and St. Methodius Post-Graduate Institute in Moscow, His Holiness was received by the president of the Institute and they discussed the different programs offered at the Institute.

His Holiness then gave a lecture on the history of the Syrian Orthodox Church and the current situation of Christians in the Middle East.

At the end of the lecture, His Holiness answered all the questions of the audience.