Visit to the Grand Mufti of the Republic of Lebanon 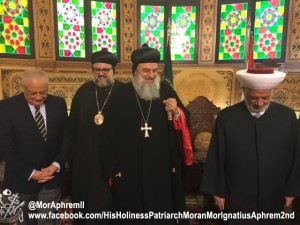 On the second day of his apostolic visit to the Archdiocese of Beirut, His Holiness Patriarch Mor Ignatius Aphrem II visited the Grand Mufti of the Republic of Lebanon Sheikh Abdellatif Derian at Dar El Fatwa in Beirut.

His Holiness was accompanied by His Eminence Mor Clemis Kourieh, Metropolitan of Beirut and the members of the Archdiocesan Council. The official delegation included His Grace Mor Maurice Amsih, Director of Public Relations and Protocol, and Very Rev. Raban Joseph Bali, Patriarchal Secretary and Media Office Director.

During the meeting, His Holiness emphasized the importance of having fraternal relations among followers of different religions. He said: “Our visit is more than protocol, it is an affirmation of the good relations that exist between the Syriac Orthodox Church and Muslims”. He added: “We stress together on the importance of the human being whom we all serve, clergy and politicians, for man is the center of our ministry and its goal”.