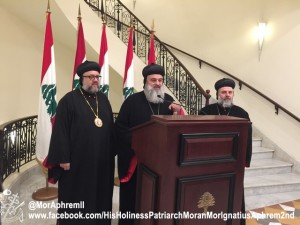 During the meeting, Prime Minister Salam recalled the historical role of the Syriac Orthodox people of Msaytbeh and the nationalistic stands that they took in different phases of Lebanon’s history.

In turn, His Holiness thanked Prime Minister Salam for receiving him and the accompanying delegation. He stated that His Excellency is doing his best in keeping the country Lebanon out of negative influences from within and without. He emphasized the importance of security, but we should not forget the economic factor which is greatly affecting the daily lives of all citizens.