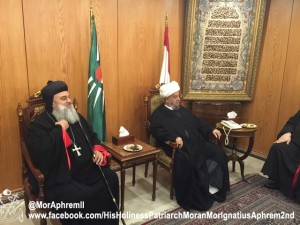 During his first apostolic visit to the Archdiocese of Beirut, His Holiness Patriarch Mor Ignatius Aphrem II visited Vice-President of the Supreme Shiite Council in Lebanon Sheikh Abdul Amir Kabalan at his official headquarters in Beirut.

His Holiness gave a historical overview of the history of the Syriac Orthodox Church of Antioch and pointed out the important phases when Syriac Orthodox People helped Muslims. He also spoke about the presence of our church in Lebanon in recent times, especially since the last century. He emphasized the importance of religions in promoting the good relations among human beings and helping them live together in peace and harmony.

Sheikh Kabalan welcomed his guests and expressed his joy at this important visit. He spoke about the close relations that exist in Lebanon between the believers from both confessions.