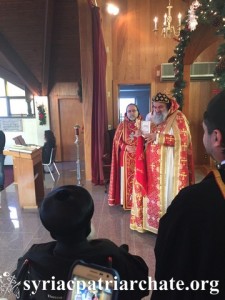 Consecrated as Archbishop of Beirut on December 12, 1965, Mor Athanasius Aphrem Barsoum celebrates his golden episcopal Jubilee after 50 years of service and devotion.
His Holiness Patriarch Mor Ignatius Aphrem II offered the Holy Qurobo on Sunday January 3, 2016 at St. Ephraim Church in Rhode Island on the occasion of the Theophany (Denho). During the Holy Qurobo, His Holiness honored His Eminence Mor Athanasius Aphrem Barsoum for his golden episcopal jubilee and offered him a pectoral icon.
His Holiness spoke about the different stages of His Eminence’s life, citing the different services and projects he administered as well as the different positions he served in since his early ordained life.
His Eminence Mor Dionysius Jean Kawak, Patriarchal Assistant and Patriarchal Delegate in the Archdiocese of Eastern USA, assisted His Holiness during the Holy Qurobo.

His Eminence Mor Athanasius Aphrem Barsoum was born on October 1st, 1932 in Homs, Syria. He studied in Qamishly till 1945 when he moved to the Seminary in Mosul. He graduated from there in 1952 and moved back to Homs to become the first secretary of Late Lamented Patriarch Mor Ignatius Aphrem I Barsoum from 1952 till 1957. He was then appointed as head of the Syriac School in Aleppo for 5 years (1957-1961). He was appointed the Patriarchal Delegate in India for 3 years (1961-1964) and a Patriarchal Vicar in Beirut for one year (October 1964- November 1965).

In Beirut, he served the church in good and bad times. He remained in his archdiocese despite the severe conditions and insecurity due to the war in Lebanon.

He authored 16 books in Syriac and Arabic; he wrote many poems and songs that are widely spread in the Syriac world.

His Eminence also participated in numerous conferences and assemblies. He is one of the founders of the Middle East Council of Churches (MECC) where he represented the Syriac Orthodox Church for more than 25 years.