Memorial Service for the Martyrs of Qamishly – St. Mark, NJ 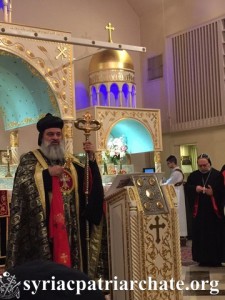 His Holiness Patriarch Mor Ignatius Aphrem II presided over the evening prayer at St. Mark Cathedral in New Jersey and conducted a memorial service for the martyrs of the suicide bombings that took place in Qamishly on December 30, 2015.
The memorial was attended by representatives of churches and congregations in New Jersey.
His Holiness spoke about the suffering of the people in Syria due to terrorist attacks. He called the martyrs of the suicide bombings the ‘Christmas Martyrs’, comparing them to the innocent children of Bethlehem killed by Herod after the birth of Christ.
Their Eminences Mor Titus Yeldho, Metropolitan of the Malankara Archdiocese of North America, Mor Silvanos Ayub, Knanaya Archbishop of America and Europe, and Mor Dionysius Jean Kawak, Patriarchal Assistant and Patriarchal Delegate in the Archdiocese of Eastern USA.