Visit to the Head of Al-Kataeb Party, Sheikh Sami Gemayel 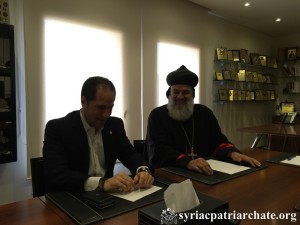 His Holiness Patriarch Mor Ignatius Aphrem II and His Beatitude Mor Ignatius Youssef III Younan, Syriac Catholic Patriarch of Antioch, visited Lebanese MP ٍSami Gemayel, Head of the Kataeb Party, at his residence in Bikfaya.
They were accompanied by His Eminence Mor Theophilos George Saliba, Syriac Orthodox Archbishop of Mount Lebanon and Tripoli, His Excellency Mor Baselius Gergess Kass Moussa, Patriarchal Assistant and Apostolic Visitor of the Syriac Catholic, Very Rev. Raban Joseph Bali, Patriarchal Secretary and Media Office Director, and Rev. Fr. Habib Mrad, Syriac Catholic Patriarchal Secretary.
His Holiness said that Christians consider Lebanon to be their last refuge in the Middle East, especially when Christians emigrate continuously from Iraq and Syria. Therefore, we demand our rights as Syriac people to have representatives in the Lebanese parliament. His Holiness stressed the need to play a role and enhance our Christian presence. He further noted that we need to remove the classification ‘minorities’ of the Syriac people.
His Beatitude also demanded a parliament seat for the Syriac Catholic and another for the Syriac Orthodox. In this way, the two will hence be recognized as essential components of the Lebanese political structure.
Sheikh Sami Gemayel emphasized the eagerness of AL-Kataeb Partyto have the fair political representation of the Syriac Churches. He had suggested a law to pass, allowing the adequate representation of all parties.