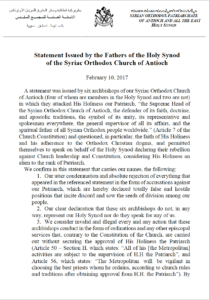 Statement Issued by the Fathers of the Holy Synod

of the Syriac Orthodox Church of Antioch

A statement was issued by six archbishops of our Syriac Orthodox Church of Antioch (four of whom are members in the Holy Synod and two are not) in which they attacked His Holiness our Patriarch, “the Supreme Head of the Syrian Orthodox Church of Antioch, the defender of its faith, doctrine, and apostolic traditions, the symbol of its unity, its representative and spokesman everywhere, the general supervisor of all its affairs, and the spiritual father of all Syrian Orthodox people worldwide.” (Article 7 of the Church Constitution) and questioned, in particular, the faith of His Holiness and his adherence to the Orthodox Christian dogma, and permitted themselves to speak on behalf of the Holy Synod declaring their rebellion against Church leadership and Constitution, considering His Holiness an alien to the rank of Patriarch.

We confirm in this statement that carries our names, the following:

The fathers of the Synod confirm their standing by the side of the lawful successor of St. Peter, His Holiness Moran Mor Ignatius Aphrem II, who was chosen by the Holy Spirit through his election by the Holy Synod in these difficult circumstances that we are currently witnessing. We value his clear fatherly conduct through his constant presence among his people, particularly during at critical times, and we call upon all Church members, clergy and laity, to pray fervently for the sake of the Holy Church and her shepherds and to rally around the their spiritual leadership.

We ask the Lord God to protect His Church from all evil and to bless her people throughout the world; by the prayers of the Virgin St. Mary, St. Peter, the head of the Apostles and all saints and martyrs.

The names of their eminences the metropolitans:

Also, in support of this statement: