Statement Issued by the General Secretariat of the Holy Synod 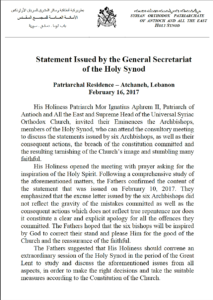 Statement Issued by the General Secretariat

of the Holy Synod

His Holiness Patriarch Mor Ignatius Aphrem II, Patriarch of Antioch and All the East and Supreme Head of the Universal Syriac Orthodox Church, invited their Eminences the Archbishops, members of the Holy Synod, who can attend the consultory meeting to discuss the statements issued by six Archbishops, as well as their consequent actions, the breach of the constitution committed and the resulting tarnishing of the Church’s image and stumbling many faithful.

His Holiness opened the meeting with prayer asking for the inspiration of the Holy Spirit. Following a comprehensive study of the aforementioned matters, the Fathers confirmed the content of the statement that was issued on February 10, 2017. They emphasized that the excuse letter issued by the six Archbishops did not reflect the gravity of the mistakes committed as well as the consequent actions which does not reflect true repentence nor does it constitute a clear and explicit apology for all the offences they committed. The Fathers hoped that the six bishops will be inspired by God to correct their stand and please Him for the good of the Church and the reassurance of the faithful.

The Fathers suggested that His Holiness should convene an extraordinary session of the Holy Synod in the period of the Great Lent to study and discuss the aforementioned issues from all aspects, in order to make the right decisions and take the suitable measures according to the Constitution of the Church.

The Fathers appreciated the stands of the members of the Church, clergy and laity, in support of the Church and its hierarchy. They called the faithful to continue praying for peace in the church and for its unity. The Fathers expressed their thanks to the sisters churches for their solidarity with the Syriac Orthodox Church in these difficults times.