The so-called Rev. Yuhanon Aydin is not a priest in the Syriac Orthodox Church and his so-called ordination is void 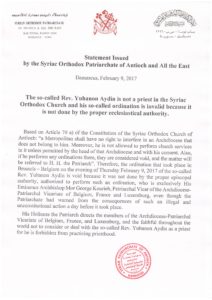 by the Syriac Orthodox Patriarchate of Antioch and All the East

The so-called Rev. Yuhanon Aydin is not a priest in the Syriac Orthodox Church and his so-called ordination is void because it is not done by the proper ecclesiastical authority.

Based on Article 70 a) of the Constitution of the Syriac Orthodox Church of Antioch: “a Metropolitan shall have no right to interfere in an Archdiocese that does not belong to him. Moreover, he is not allowed to perform church services in it unless permitted by the head of that Archdiocese and with his consent. Also, if he performs any ordinations there, they are considered void, and the matter will be referred to H. H. the Patriarch”. Therefore, the ordination that took place in Brussels – Belgium on the evening of Thursday February 9, 2017 of the so-called Rev. Yuhanon Aydin is void because it was not done by the proper episcopal authority, authorized to perform such an ordination, who is exclusively His Eminence Archbishop Mor George Kourieh, Patriarchal Vicar of the Archdiocese-Patriarchal Vicariate of Belgium, France and Luxemburg, even though the Patriarchate had warned from the consequences of such an illegal and unconstitutional action a day before it took place.

His Holiness the Patriarch directs the members of the Archdiocese-Patriarchal Vicariate of Belgium, France, and Luxemburg, and the faithful throughout the world not to consider or deal with the so-called Rev. Yuhanon Aydin as a priest for he is forbidden from practicing priesthood.