Visit of a Hungarian Delegation to Help Persecuted Christians 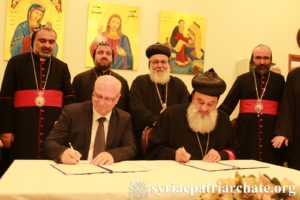 His Holiness Mor Ignatius Aphrem II received a delegation from the Hungarian Ministry of Human Capacities led by Mr. Tamas Torok, Deputy State Secretary for the Aid of Persecuted Christians in the presence of His Excellency the Ambassador of Hungary to Lebanon, at Mor Gabriel Monastery, Ajaltoun – Mount Lebanon.

The reception was also attended by His Beatitude Mor Ignatius Youssef III Younan, Syriac Catholic Patriarch of Antioch, and by their Eminences the Archbishops: Mor Theophilos George Saliba, Archbishop of Mount Lebanon and Tripoli, Mor Selwanos Boutros Al-Nehmeh, Archbishop of Homs, Hama and Environs, Mor Justinos Boulos Safar, Patriarchal Vicar in Zahleh and Beqaa, Mor Clemis Daniel Kourieh, Metropolitan of Beirut, Mor Chrysostomos Mikhael Shemoun, Patriarchal Vicar in the Patriarchal Benevolent Institutions in Atchaneh, and Mor Timotheos Matta Al-Khoury, Patriarchal Vicar in the Patriarchal Archdiocese of Damascus. His Grace Mor Ephrem Yousif Abba, Syriac Catholic Archbishop of Baghdad and Basra was also present in addition to priests, monks, deacons and a number of displaced families from Iraq and Syria living in the monastery.
His Holiness and His Beatitude presided over the evening prayer (ramsho) at Mor Gabriel Church; then, the patriarchs and the Hungarian delegation met with the displaced families and listened to their sufferings in their own countries as well as the persecution and violence that drove them out of their homeland.
Then His Holiness and His Beatitude signed an agreement of cooperation with the Hungarian Ministry to collaborate together to help the persecuted Christians in the Middle East through projects and developmental programs executed by the Church and helping them remain in their land.