Reception of the Constantin Brancoveanu Award 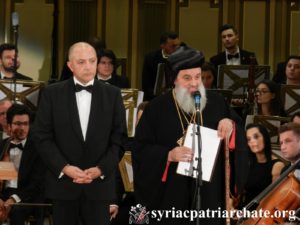 During the ceremony, His Holiness was granted “The Constantin Brâncoveanu Award” by the President of the Alexandrion Foundation Dr. Nawaf Salameh; this award is given yearly to a prominent religious leader as a Special Award.

In his speech, His Holiness thanked the Alexandrion Foundation for all the charitable work that it is offering to the people, reaching their hearts and souls. He also spoke about the strong faith of the Martyr Prince Constantin Brancoveanu who sacrificed his power and throne, refusing to deny Christ or denounce Him. His Holiness offered this award to the 2 abducted Archbishops of Aleppo, Mor Gregorius Youhanna Ibrahim and Boulos Yaziji.

Several awards were then granted upon the election of the award’s jury for the arts, science and economy.