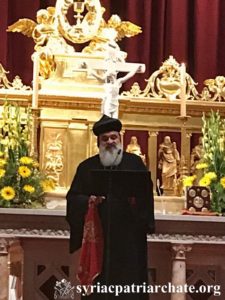 His Holiness Patriarch Mor Ignatius Aphrem II participates in an Ecumenical prayer for the Christians of the Middle East held at the Evangelical Church in Berlin.

Heads of the Oriental Orthodox churches, the Evangelical church as well as other church leaders also attended the prayer.

In his sermon, His Holiness acknowledged the courage of the German people and parliament for recognizing the horrendous atrocities against Christians in the former Ottoman Empire as acts of Genocide against Armenians, Syriacs, Greeks and other minorities. He also spoke about the influence of the Evangelical reformation, which the Evangelical Church is celebrating its 500 jubilee; he said that the reformation has brought forth both positive and negative consequences to the Christian Church. His Holiness then commented on the Biblical passage about the Beatitudes read during the prayer. He highlighted the fact that our Lord cared less about external matters and focused on the inner issues thus He turns things upside down and challenges beliefs and convictions held by people and codified many centuries earlier.

His Holiness was accompanied by their Eminences Mor Philoxenus Mattias Nayis, Patriarchal Vicar in Germany, and Mor Julius Hanna Aydin Director of Foreign Affairs in the Diocese of Germany, as well as Very Rev. Raban Joseph Bali, Patriarchal Secretary and Media Office Director.