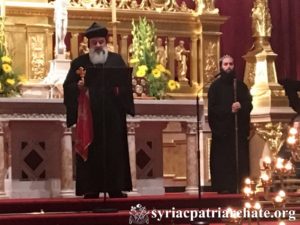 Sermon Delivered by His Holiness
Mor Ignatius Aphrem II
Patriarch of Antioch and All the East
and Supreme Head of the Universal Syrian Orthodox Church
on October 7, 2014, t the Evangelical Church in Berlin – Germany

Your Holinesses and Beatitudes,
Your Excellencies, your Graces,
Reverend priests and pastors,
Dear brothers and sisters in Christ

We gather here today in the name of our Lord Jesus Christ, to open our hearts and listen to His message for us at these times of confusion when we desperately need His guidance.

We wish to take this opportunity to thank the Evangelical Church in Germany for inviting us, Oriental Orthodox Churches, to discuss the present situation of Christians in the Middle East and to pray together in the context of this ecumenical prayer for the suffering people of God throughout the world.

During the last 3 days, during our meetings and discussions with politicians as well as church leaders here in Berlin, we have been able to tell our story. The story of people who followed the Lord Jesus Christ starting from the day of Pentecost. It was in Antioch that the believers in Christ were called Christians during the preaching of the Holy Apostles St Peter and St. Paul.

People who lived in the land of their ancestors for two thousand years as Christians and for many more millennia as the indigenous people of Mesopotamia, Iraq, Syria and that entire area, who took many great risks and withstood many persecutions and Genocides in their faithfulness to Christ and to His Gospel.

People who are going through great difficulties nowadays, struggling to be allowed to stay in their homeland with dignity and equality, paying a high price for that. Thousands of martyrs, hundreds of destroyed churches, monasteries, schools and other church institutions. The Abduction of the two Orthodox Archbishops of Aleppo Boulos Yaziji and Mar Gregorios Yuhanna Ibrahim since 22nd of April 2013 has resulted in the migration of tens of thousands of Christians from the city of Aleppo. We kindly invite you all to pray for their safety and to do all you can for their immediate return.

In this regard, we wish to acknowledge with gratitude the courage of the German people and parliament for recognizing the horrendous atrocities committed against Christians in the former Ottoman Empire as acts of Genocide against Armenians, Syriacs, Greeks and other minorities.

This gathering happens as the EKD celebrates the 500 jubilee of the reformation. We take this opportunity to offer our sincere prayers and best wishes to our evangelical brothers and sisters in Germany and elsewhere in the world. May the Lord who prayed for the unity of His disciples and His Church, guide us all to fulfill His divine will that all may be one.

It is also an occasion to deeply reflect on what happened some 5 centuries ago and how it impacted the Christian Church forever.

If we pose and critically examine the outcome of the reformation, we see that it has brought forth both positive and negative consequences to the Christian Church. The reformation has no doubt challenged the entire Christian world in the last five centuries to be more attentive to the word of God.

We, Christians, need to remind ourselves to be faithful to the Gospel and to the faith “delivered once to the saints” (Jude 1: 3). We need to walk in the footsteps of the apostles who were persecuted and died in defense of their faith in the resurrected Lord. The challenge is to overcome the tempting offerings of this world. It is to forget about the mentality of power and authority, and fight for what is right and true.

On the other hand, it has caused further divisions in the body of Christ, which obviously was not the intention of the early reformist.

In our context today, we want to highlight its impact on the Oriental Orthodox Churches. The Oriental Orthodox Churches were not part of the western Christianity against which the first reformers protested. However, it affected us in a great way. The work of Protestant missionaries in the Middle East during the last two centuries has weakened the churches of the region and resulted in the establishment of new churches whose membership comes almost exclusively from Apostolic Churches since it was not easy to convert Muslims who can face death if they abandon their religion.

This trend continues today with the actions of newly created born-again groups who are targeting our people not only in the East, but also here in the west. They are taking advantage of the suffering of our people in the conflict areas in the Middle East and of the vulnerability of the refugees in the west in order to take them away from their churches and re-baptize them. Unfortunately, this kind of “proselytizing” is supported by some historical Protestant churches.

It saddens us to see such a misuse of the need of our faithful. We would prefer to see a true Christian spirit of cooperation and collaboration among our churches. We would like to see us cooperating together for the common benefit of the refugees, poor and needy, in accordance to our Lord’s teachings. In this way, we would be true followers of Christ, Who leads us in His way and according to His will.

Chapter 5 of the gospel of our Lord Jesus Christ according to St. Matthew says:

“and seeing the multitudes, He  (Jesus) went up on a mountain, and when He was seated His disciples came to Him. Then He opened His mouth and taught them, saying:”

As I was reading these verses from the Gospel, I could not help but compare in mind how Jesus preached His first sermon with how politicians and – to a certain degree – we, church leaders and preachers, prepare for our sermons and speeches.

I am always amazed at the extend politicians and people running for public offices can go in their promises during their election campaigns. First, they consult public relations firms who advise them on their looks, how they should sit or stand and so on, in order to leave a good impression on their audience. They want people to know how strong and eloquent they are. Then, they employ speech writers to help them write their speeches repeating certain key words and avoiding others in order to influence our minds and make us believe what they want us to believe. When it comes to the content of their speech, there we will find them giving a long list of promises. They tell us how they can solve all our problems, social, political, financial, unemployment, … you name it. They explain their strategies and develop their policies in a way that can be acceptable to the people, sometimes not without twisting the truth. They show their approaches to the current issues and future endeavors. And, of course, they parade their family members on the stage next to them to show us how committed they are to family life. There is no doubt that all these tactics help them in their campaigns.

This is true not only in today’s politics. It was the same during Jesus’ time too when Greek Philosophers and Roman senators were delivering their discourses employing logic, philosophy and arts in order to impress their audience and get their ideas through.

When we turn back to our Lord Jesus Christ, giving His first public sermon on the mountain to His disciples and to the crowds that followed Him, we find a totally different scenario. He is sitting there, on a rock, on the mountain, alone, without any member of His earthly family. Neither His mother, the Virgin Mary, nor anyone of His brothers, whom we believe, were Joseph’s sons from a different marriage, are mentioned. His brothers had, in fact, distanced themselves from Him calling Him a fool.

In His first sermon, He cares less about the external matters and focuses on the inner issues. Yes, He also spells out His plans and strategies for His spiritual rule and heavenly kingdom. He reveals His new understanding of things, offering a totally new approach to life. According to Him, our strength and might does not lie in how powerful we are, but how poor in the spirit. Meekness and humility ought to replace our arrogance and pride. Real hunger and thirst should be for righteousness and not for food and drink for if we seek first the Kingdom God and His righteousness, all these things shall be added to us (cf. Matthew 6:33). Instead of peace and protection, He promises us trials and persecution. Even when persecuted, we have to be peacemakers, according to Him.

In this sermon, Jesus turns things upside down and challenges beliefs and convictions held by people and codified many centuries earlier.

In the context of what we witness today in terms of persecution of Christians and their suffering, we are all called to challenge ourselves and to prove that we trust Him to the end, no matter how high the waves of this world are, for He is a faithful Lord Who promised to be with us until the end.

Let me conclude by sharing a few words from the commentary of St. Ephrem the Syrian, the fourth century Father of the Church, theologian and poet, on the Book of Diatesssaron, the four gospels in one narrative, compiled by second century Syriac scholar Tatianus:

God bless us all.