Meeting with the Premier of NSW Hon. Gladys Berejiklian 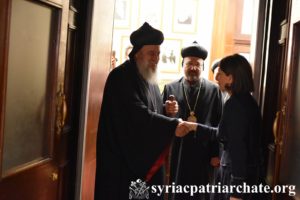 His Holiness Patriarch Mor Ignatius Aphrem II met Honourable Gladys Berejiklian MP, Premier of New South Wales, at the Parliament House in Sydney, in the presence of parliamentarians and church leaders of the oriental churches in New South Wales.

His Holiness and Her Honour discussed the current situation of Christians in the Middle East, especially in Syria. He asked Her Honour to support a peaceful resolution in Syria and to fight terrorism, as well as to promote peace and national reconciliations. His Holiness also urged to intensify the efforts to release the two abducted Archbishops of Aleppo Boulos Yaziji and Mor Gregorius Youhanna Ibrahim.

Furthermore, His Holiness thanked Her Honour for her warm welcome and expressed his appreciation to all what Australia is doing in support to Syrian and Iraqi refugees.

Her Honour welcomed His Holiness and spoke assured the importance of endorsing peaceful resolution in Syria. She also spoke about the projects and plans that Australia is leading to help relief the refugees.