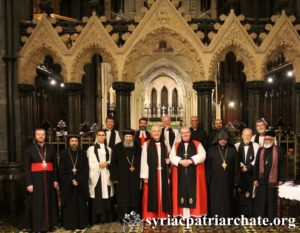 Between 23 and 28 October 2017, the International Commission for the Official Dialogue between the Oriental Orthodox Churches and the Anglican Communion held its sixth meeting at the Cathedral of St. Patrick in Dublin – Ireland.

The agreement was officially signed by His Eminence Anba Bishoy, Metropolitan of Demiat, Kafr Al-Sheikh and Abbot of the Monastery of Saint Demiana in Al-Barari, representing the Oriental Orthodox Churches family, and His Grace Bishop Gregory Cameron from the Church of Wales, representing the Anglican Communion.

The Commission began its new work on Authority in the Church, with reflections on papers prepared by both Anglican and Oriental Orthodox members on topics that included the Number of Ecumenical Councils, the Interpretation of the Council of Chalcedon, the Meaning of the Anathemas of Ecumenical Councils, and the Authority of Scripture and Tradition.

The participants agreed to thoroughly study these questions in the coming meeting of the Commission in October 22-27, 2017 in Beirut, Lebanon, hosted by the Syriac Orthodox Patriarchate of Antioch and all the East.