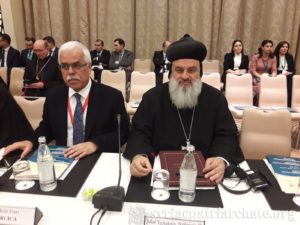 Speech of His Holiness
Mor Ignatius Aphrem II
Patriarch of Antioch and All the East
and Supreme Head of the Universal Syriac Orthodox Church
at the International Conference entitled
“2017 – Year of Islamic Solidarity: Interreligious and Intercultural Dialogue”
on December 21st, 2017, in Baku – Azerbaijan

Your Beatitude, Excellencies, Ladies and Gentlemen,

I greet you all in the name of the One God, the Maker of heaven and earth, Who created us all to live in peace and harmony according to His divine will. I wish to take this opportunity to thank the Caucasus Muslims Board, in the person of His Virtue Sheikh-ul-Islam Allahshukur Pashazade for inviting us to this International Conference at the end of the year of Islamic Solidarity. We hope that this gathering, which concludes a yearlong activities in different cities, will provide clear guidelines to future generations regarding a peaceful co-existence among people of different faiths and convictions.

Being in Baku, the Capital of Azerbaijan, brings to our memories a golden chapter in the history of our Syriac Orthodox Church of Antioch, which was present in this beautiful country for many centuries.

We come to you from Damascus – Syria, the oldest continuously inhabited Capital in the world. In Syria, Muslims, Christians and Jews lived side by side in peace and harmony for the most parts of the last fifteen centuries. People respected each other, worshipping God, each according to their own tradition. In fact, Christians played an active role in the establishment of the departments of the Umayyad Caliphate in Damascus (دواوين الخلافة الأموية). Syriac Christianity, in particular, contributed a great deal to the advancement of science and knowledge during both the Umayyad and the Abbasid Caliphates (الخلافتان الأموية والعبّاسية). Major works of philosophy, medicine, algebra, and astronomy, were translated into Arabic by Syriac scholars working at the request of Caliphs.

Today, Iraq, Syria and other parts of the Middle East are witnessing a rapid decline in the number of Christians, who are the indigenous people of that land. This, I believe, is a great loss to both Christians and Muslims in the region. Conflicts and wars, caused by ideologies of extremism and fanaticism, which reject diversity and co-existence, are destroying the fabric of our societies. Using religion in this conflict has harmed not only Christians, but also Muslims. The abduction of the two archbishops of Aleppo, Boulos Yaziji and Mor Gregorius Youhanna Ibrahim, remains a source of great distress and a cause for many Christians to leave Syria. Even after four and a half years, the world is silent about them. We appeal to all to help their secure immediate release. Therefore, the whole world should unite against terrorism driven by religious fanaticism to save our world from destruction.

In order for the followers of all religions to live in peace, we believe the following principles are of utmost importance:

The denial of legitimate national or religious rights of people will only create new conflicts. Hence, we are greatly disturbed by the declaration of the president of the United States of America concerning the city of Jerusalem, which increased violence in the area. Jerusalem is holy to the followers of the three monotheistic religions, and should remain all times open to Christians, Muslims and Jews, and its final status should be decided through negotiations based on United Nations resolutions.

It is the responsibility of all of us to make sure that our world will survive the current up-evil, and that future generations will be able to lead a peaceful life. In this regard, we think that a thorough revision of school textbooks should be carried out to make sure that they don’t contain any language which insights hatred and religious intolerance. Likewise, we think that correct interpretation of religious texts, and a reconciliatory and moderate preaching should be encouraged by preachers of all religions.

We thank you and may God bless all.