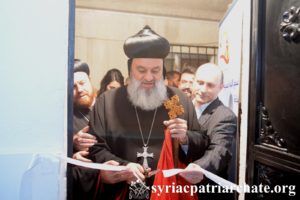 The center is a project lead by St. Ephrem Patriarchal Development Committee (EPDC), and aims at offering free services to patients with kidney failure and in need of dialysis, thus giving them a chance to live productive lives.

His Holiness prayed at the center that it may be a place of healing to those in pain.

Their Eminences: Mor Nicodemus Daoud Sharaf, Metropolitan of Mosul, Kurdistan and their Environs, Mor Timotheos Matta Al-Khouri, Patriarchal Vicar for the Patriarchal Archdiocese of Damascus, and Mor Maurice Amsih, Archbishop of Jazeera and Euphrates were present.

After the inauguration, His Holiness attended a formal reception organized by EPDC in honor of the doctors who volunteer or help the committee in all its relief programs.

His Excellency Mario Cardinal Zenari, Apostolic Nuncio in Damascus, as well as other church leaders from Damascus attended the reception.

During the reception, a short movie about EPDC projects and work was presented.

In his word, His Holiness emphasized that the role of the church is to serve the world and make it a holy place. He said that we as humans need each other, and should work together to reduce the pains and sufferings of one another. He added that the church tries always to follow the commandments of our Lord in all what she’s doing, keeping in mind that “‘We are unprofitable servants. We have done what was our duty to do.” (Luke 17:10). Moreover, the church tries her best to keep human’s dignity which is being lost due to the crises. In addition, His Holiness stressed the fact that our role as Christians, along with other religions, is to spread the culture of peace.

At the end of his word, His Holiness explained the goals of opening a dialysis center as well as naming it after the late Patriarch Zakka I Iwas of blessed memory.

His Eminence Mor Timotheos Matta Al-Khoury talked then about the various fields of service of EPDC and thanked all those who are volunteering and helping all the suffering people.

During the event, His Holiness honored the doctors offering services to EPDC with tokens of appreciation.