First Holy Qurobo in Deir ez-Zor after its Liberation 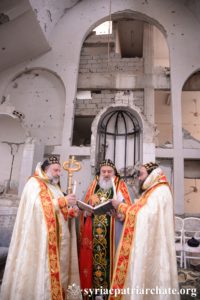 His Holiness Patriarch Mor Ignatius Aphrem II celebrated the first Holy Qurobo over the ruins of Virgin Mary church in Deir ez-Zor, after the city’s liberation.

The Governor of Deir ez-Zor Mr. Mohammad Ibrahim Samra, received His Holiness and the accompanying delegation at the airport.

His Holiness was assisted by their Eminences: Mor Maurice Amsih, Archbishop of Jazeera and Euphrates, and Mor Timotheos Matta Al-Khoury, Patriarchal Vicar in the Patriarchal Archdiocese of Damascus.

The Holy Qurobo was attended by several religious figures, as well as the faithful who started to return back to the city.

In his sermon, His Holiness thanked the Lord that the irregular situation in the city has come to an end, and expressed his deep sorrow to see destruction everywhere, especially that churches, mosques and all kinds of buildings were destroyed by terrorists. However, His Holiness assured that his visit to the city is a vivid message to all evil hands that we are the children of life, and that Syria will recover no matter what. He also expressed his solidarity with all families and citizens of the city who lost their beloved ones or their houses and works, and assured them that the church will always try its best to help them. His Holiness also expressed his sadness to celebrate the Holy Qurobo over the ruins of Virgin Mary Church.