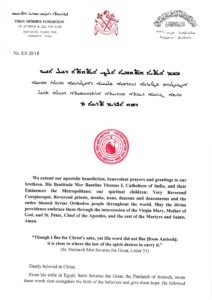 We extend our apostolic benediction, benevolent prayers and greetings to our brethren, His Beatitude Mor Baselius Thomas I, Catholicos of India, and their Eminences the Metropolitans; our spiritual children: Very Reverend Corepiscopoi, Reverend priests, monks, nuns, deacons and deaconesses and the entire blessed Syriac Orthodox people throughout the world. May the divine providence embrace them through the intercession of the Virgin Mary, Mother of God, and St. Peter, Chief of the Apostles, and the rest of the Martyrs and Saints. Amen.

“Though I flee for Christ’s sake, yet His word did not flee [from Antioch];
it is close to where the law of the spirit desires to carry it.”
(St. Patriarch Mor Severus the Great, Letter 53)

From his exile in Egypt, Saint Severus the Great, the Patriarch of Antioch, wrote these words that strengthen the faith of the believers and give them hope. He followed the footsteps of St. Paul, the Apostle of the Nations, who wrote to his disciple Timothy: “Remember Jesus Christ, raised from the dead, a descendant of David—that is my gospel, for which I suffer hardship, even to the point of being chained like a criminal. But the word of God is not chained.” (II Timothy 2: 8-9).

Today, we declare the Year 2018 the 1500 Jubilee of the Exile of Patriarch Mor Severus the Great to Egypt. On this occasion, we invite you to meditate on the story of the life of this great saint, take him as a model and firmly abide by the Orthodox doctrines and teachings.

Our saint was born in Sozopolis in the province of Pisidia around the year 459. In Alexandria, he studied grammar and rhetorics in both Greek and Latin. He studied jurisprudence and philosophy at the Roman school in Beirut. In 488, he was baptized in Tripoli. He chose the way of asceticism and became a monk at the Monastery of St. Romanus in Mayoma, Palestine. After his priestly ordination, he built a monastery and resided in it 24 years worshipping God, practicing the virtues of asceticism, studying the Holy Bible and the writings of theologians and composing volumes in defense of the Orthodox faith. He became well known and journeyed to Constantinople with 200 monks in 508 to defend the faith. He stayed there around 3 years, until 511.

After the removal of Flavianus II, Patriarch of Antioch, Mor Severus was elected to succeed him on the apostolic see of Antioch. He was enthroned on November 6, 512. During this time, he was delivering his sermons in defense of true orthodox faith and promoting Christian morality. He never deviated from the path of asceticism. When Justinian I, the Chalcedonian, succeeded Anastasius and became Emperor in 518, he severely persecuted the Orthodox Christians and exiled a group of Orthodox bishops. Mor Severus was forced to leave Antioch on September 25, and he arrived in the coastal city of Seleucia. From there, he moved to Egypt on September 29, 518.

In the absence of its shepherd, Antioch suffered many harsh persecutions; the Chalcedonians seized the opportunity of the exile of Mor Severus and installed illegal patriarchs, starting thus the line of succession of the Chalcedonian Patriarchs.

Our saintly Patriarch continued to administer the Church of Antioch from his exile in Egypt for a period of 20 years. He encouraged the believers to remain faithful to the Orthodox faith and wrote letters encouraging them to endure the persecutions. During this period, at the invitation and insistence of the Emperor Justinian, St. Severus attended a meeting for unification in Constantinople in 535; he remained there for a year and a half. When he felt that the meeting was a waste of time, he returned to Egypt with the help of Justinian’s wife, the Syriac Empress Theodora. He died there on February 8, 538.

While we remember the steadfast orthodox faith of Patriarch Mor Severus the Great – the Crown of the Syriac People – as well as his wisdom in administering the Church of Antioch while he was in exile, we also celebrate his great role in preserving the See of Antioch to this day. Today, as we consider the hardships suffered by St. Severus while in exile in Egypt where the Lord Himself took refuge with His Holy Mother Mary and St. Joseph, the situation of our suffering people of the Middle East comes to our mind. Christians of the Middle East and others have become refugees in different parts of the world, because of threats on their lives and, on many occasions, having to choose between denial of faith and martyrdom. In one of his letters to the Syrian Bishops at Alexandria, St. Severus writes: “While you are persecuted, you preach the Gospel loudly; while you are silent, you speak most expressively”

We, likewise, hope that the current threats facing Christians in the Middle East will only strengthen our presence and witness in the land of our forefathers.

To appropriately commemorate this Jubilee, the Department of Syriac Studies at our Patriarchate is organizing a Symposium on Mor Severus the Great at our Patriarchal Residence in Atchaneh – Lebanon, from May 26 to 27, 2018. Another conference is organized by the Department of Syriac Studies at the University of Salzburg in Austria. The Patriarchal Vicariate of Germany is also organizing a conference in October in collaboration with the University of Heidelberg. We will also celebrate the consecration of the Church of Mor Severus the Great at the new Patriarchal Residence in Atchaneh as well as publish books that shed the light on the life and works of this great saint.

May the Lord bless you all on the occasion of this Jubilee, through the intercession of the Holy Virgin Mary, Mother of God, St. Severus the Great, the Crown of the Syriac People, and all the martyrs and saints. Amen.  ܘܐܒܘܢ ܕܒܫܡܝܐ ܘܫܪܟܐ

The Feast of St. Severus of Antioch

Which is the 4th year of our Patriarchate