Keynote Address at the Conference of World Mission and Evangelism 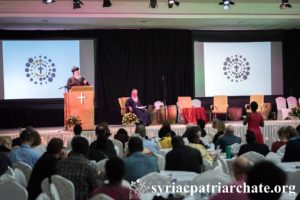 13 March 2018, Arusha, Tanzania: H.H. Moran Mor Ignatius Aphrem II, Patriarch of Antioch and all the Eaar, the supreme head of the Universal Syriac Orthodox Church speaks during the Embracing the Cross plenary. From 8-13 March 2018, the World Council of Churches organizes the Conference on World Mission and Evangelism in Arusha, Tanzania. The conference is themed “Moving in the Spirit: Called to Transforming Discipleship”, and is part of a long tradition of similar conferences, organized every decade.

His Holiness Patriarch Mor Ignatius Aphrem II participated in the closing session at the Conference of “World Mission and Evangelism”, organized by World Council of Churches (WCC) in Arusha – TANZANIA.

During the session, His Holiness gave the Keynote Speech entitled: “Embracing the Cross.”

He emphasized that “the mission of the Church is the salvation of the souls. Therefore, the universal Church constantly seeks to spread the gospel of Christ among all the nations, in order for the world “to know Christ and the power of His resurrection” (Philippians 3: 10), so they may believe in Him as the Savior and Redeemer.”

His Holiness added that “in Christianity, “God is Love” (I John 4:8); therefore, Christians’ mission is to spread the culture of love among all those who are around them. It is the love for God, reflected in the love of the neighbor.” He said that “Christians are called to love their neighbor, without personal profit of any sort. It is the love based on self-sacrifice, emptying one’s self, and giving unconditionally […] Thus, we understand the mission of the Church to be that of ministering to the world in order to sanctify it.”

His Holiness then talked about discipleship, he said that “In Christianity, we are called to be true disciples of Christ” and that “we aspire to imitate the Lord.” He then drew the attention to the fact that “with witnessing to the Lord both in word and in deed, comes persecution and tribulation” and that “Christianity is not welcomed in the world because it puts people out of their comfort zone. It challenges their worldly philosophical convictions with the simplicity of faith.”

He then spoke about the many tribulations and genocides that the Syriac Orthodox Church faced throughout the centuries; “Some 100 years ago, a massive genocide took place in the Ottoman Empire aiming at eliminating Christianity from the land of its birthplace” he said, and continued “Today, we continue to suffer persecution at the hands of terrorist groups such as ISIS, Al-Nusra and others, who are targeting Christian congregations and completely destroyed many of our churches and other institutions.”

However, he said “the Syriac Orthodox Church, as a witness of Christ, along with the other sister churches, is trying to offer hope to all the victims of such barbaric behavior.”

His Holiness considered that “our presence is a necessity not only for Christianity to continue in the land where it was born, but also for the people of the area. Christians have always been an essential element of reconciliation and bridge building among different ethnic and religious components of the region.” He added, “We need to bring hope to our people that they still have a future in their homeland by tending to their needs, both in terms of security and financial help.”

At the end of his speech, His Holiness reassured that “the Church today is faithfully embracing the Cross of Christ, and follows Him to the Calvary trusting that, from death, life is given in Him.