Visit of His Holiness to Catholicose Karekin II 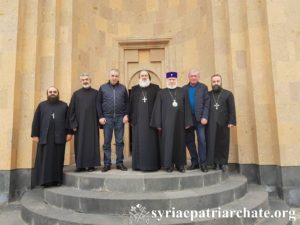 From March 6 to 10, 2018, His Holiness Patriarch Mor Ignatius Aphrem II made a private visit to His brother in Christ His Holiness Catholicose Karekin II, Catholicose-Patriarch of All Armenians, in Etchmiadzin – Armenia.

His Holiness was accompanied by their Eminences: Mor Timotheos Matta Al-Khoury, Patriarchal Vicar of the Patriarchal Archdiocese of Damascus, and Armash Nalbandian, Armenian Orthodox Archbishop of Damascus.

His Holiness Patriarch Aphrem was warmly received by His Holiness Catholicose Karekin. The Pontiffs visited several Monasteries and historical sites in Armenia.

They emphasized the history of good relations between the two sister churches: Syriac Orthodox Church and Armenian Orthodox Church, as well as the shared martyrdom that the clergy and faithful of both churches had gone through at the turn of the twentieth century during the Armenian Genocide, and the Syriac Genocide SAYFO.

His Holiness Patriarch Mor Ignatius Aphrem II also held a meeting with the seminarians of Gevorkian Theological Seminary. He spoke about the importance of seminarian studies and life in preparing for pastoral service; he then answered various questions of the seminarians.