Meeting with His Majesty King Abdullah II of Jordan 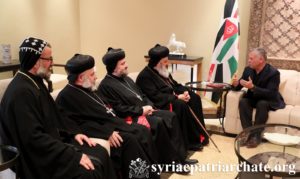 His Holiness thanked His Majesty for supporting the Churches and the Christian presence in the region, remarking the situation in Syria and Iraq. His Holiness expressed his happiness with regards to the positive developments in Syria.

However, he denounced the ambiguity surrounding the case of the two abducted Archbishops of Aleppo Mor Gregorius Youhanna Ibrahim and Boulos Yaziji, and asked the help of His Majesty to bring the case to a good end.

His Holiness also spoke about the Syriac Orthodox Church to be built on the Jordan River side in the near future, and introduced to His Majesty Very Rev. Raban Gabriel Dahho, whom he will ordain Archbishop, Patriarchal Vicar in Jerusalem, Jordan, and the Holy Lands, tomorrow Wednesday.

His Majesty King Abdullah welcomed His Holiness and assured him that Christians are a major component of the region and that Jordan will continue to defend the properties of the Churches especially in Jerusalem, and will not stop supporting the Christian presence in the Middle East, especially in Jordan.

The meeting was also attended by His Royal Highness Prince Ghazi bin Muhammad bin Talal, chief adviser to the King for Religious and Cultural Affairs and the King’s Personal Envoy, Royal Court Chief, the King’s Advisor, and Director of the King’s Office.