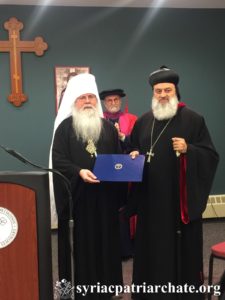 On May 18, 2019, His Holiness Mor Ignatius Aphrem II was awarded an honorary doctorate in Divinity from St. Vladimir Orthodox Theological Seminary in New York.

The President of the seminary bestowed His Holiness the doctorate, in the presence of His Beatitude Metropolitan Tykhon, <br>Metropolitan of All America and Canada of the Orthodox Church in America (OCA) and Board Chairman of St. Vladimir’s Orthodox Theological Seminary in New York, their Eminences archbishops: Mor Dionysius Jean Kawak, Patriarchal Vicar for the Archdiocese of the Eastern United States of America, Mor Silvanos Ayub, Knanaya Archbishop of Europe and America, and Mor Timotheos Matta Al-Khoury, Patriarchal Vicar for the Patriarchal Archdiocese of Damascus and other accompanying clergy and a number of Their Graces Archbishops, as well as academic figures from the seminary.

The president of the Seminary expressed his happiness to bestow to His Holiness the honorary doctorate, assuring on behalf of the academic staff and the university their respect to His Holiness for the hard effort and service he is doing to spread the word of God, as well as to let the voice of all persecuted Christians reach the whole world.