Meeting with Governer of Frias 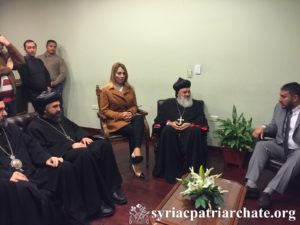 On June 20, 2019, His Holiness Patriarch Mor Ignatius Aphrem II met with His Excellency Dr. Ástor Anibal Padula, Governor of Frias, at the Municipality of Frias in Argentina.

His Excellency welcomed His Holiness in Argentina, and in Frias. He praised His Holiness’s efforts in defending Christianity in the Middle East, as well as taking care of the Church in the diaspora.

His Holiness thanked His Excellency for his warm reception. He spoke about the historical presence of our Syriac Orthodox Church in Argentina; His Holiness also recalled the Syriac genocide Sayfo, and spoke about the situation in Syria and the countries of the Middle East. He also raised the case of the two abducted archbishops of Aleppo Boulos Yaziji and Mor Gregorius Youhanna Ibrahim.

His Holiness and His Excellency moved then to Park of May 25 in Frias, where they put a wreath of roses before the monument of Liberty.