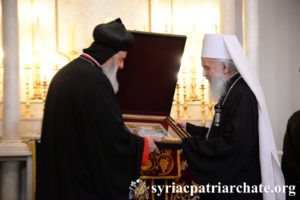 On June 2, 2019, His Holiness Patriarch Mor Ignatius Aphrem II, Patriarch of Antioch and All the East, Head of the Universal Syriac Orthodox Church, received His Holiness Irinej, Archbishop of Peć, Metropolitan of Belgrade and Karlovci, and Serbian Patriarch, at the Patriarchate Headquarters in Bab Touma – Damascus.

His Holiness received the Serbian Patriarch, along with His Beatitude John X, Greek Orthodox Patriarch of Antioch, at the main entrance of St. Georges Patriarchal Cathedral, where the choir of St. Aphrem Patriarchal Scouts played music.

Their Holinesses and Beatitudes then entered the Cathedral in a procession with their Eminences and Graces the Archbishops, as well as the clergy.

In the Cathedral, Sutoro prayer was held.

At the end, His Holiness gave an address in which he welcomed his esteemed guest. He said “We welcome you on behalf of the faithful of our Antiochian Syriac Church, who kept the Christian faith despite the continuous hardships and persecutions, ever since they became Christians by the preaching of Sts. Peter and Paul, and till our days. And they witness to the Lord Jesus Christ by their deeds and by their blood; our church truly became the ‘mother of martyrs’”.

He added “we welcome you, on behalf of the citizens of this dear country Syria, who are still suffering the oppression of great powers and countries which helped terrorist groups… This reminds us of what you endured in your dear country in the nineties of the last century”.

His Holiness recalled the visit of the Serbian Patriarch to our Church in Sweden where he had the chance to meet with the faithful there. His Holiness added “those faithful long for the day on which we partake of the same one Eucharistic chalice, after the theologians of both churches agreed that we confess the same belief in our Lord Jesus Christ, the Incarnate Word”.

At the conclusion of his address, His Holiness presented to His Holiness Serbian Patriarch an Icon of the Virgin Mary carrying the Divine Child, as a token of mutual respect between both Churches.

In his address, His Holiness Patriarch Irinej thanked His Holiness Patriarch Aphrem for his overwhelming reception; he said “What unites us is love and faith in the Lord Jesus Christ; we are one Church, although, sorrowfully, the historical circumstances had divided us”. His Holiness called for intensified efforts to reach the desired unity among the churches through “dialogue and agreements about all matters of faith and dogma”, something which the both “the Syriac Church and the Serbian Church yearn for”. He added that the Church needs unity “especially in these difficult times; our strength is in our unity, and our unity is not only in words but in serious action towards full unity in all spheres.”

His Holiness prayed for the Syrian people “who are suffering because of this tough war”; “We are following everything that is going on in Syria,” he said. Speaking about emigration and leaving houses and churches, His Holiness compared the situation in Syria and Serbia, “History repeats itself,” he said; “What Syria is suffering today, we have suffered in Serbia after the Second World War, where we lost more than a million people in addition to the destruction of churches and homes… History also repeats itself today unfortunately in Kosovo.” “However,” added Patriarch Irinej, “we have faith in the Lord who sees our suffering and will finally give victory to the truth”.

Afterwards, Their Holiness and Beatitudes put flowers at the memorial of the Syriac Martyrs of the Syriac Genocide Sayfo; they also lit the flame of peace. Then, they entered the Patriarchal Hall where they received the faithful.