Visit to the Legislative Council of Buenos Aires in Argentina 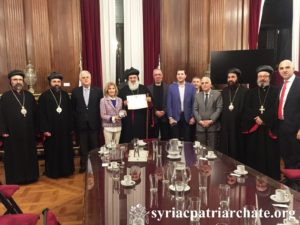 He was received by His Excellency Mr. Omar Abboud, Member of the Legislative Council, as well as a group of officials.

The council welcomed His Holiness, and praised his leading role in defending persecuted Christians in the Middle East. They declared him as an Honorary Guest to Argentina. In turn, His Holiness thanked the council for the overwhelming reception and the honoring they gave him. He also spoke about Sayfo Genocide which the Church commemorates tomorrow June 15th.