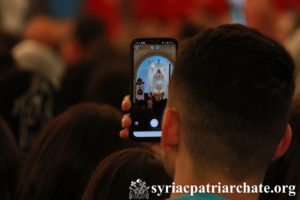 At the beginning, His Eminence Mor Anthimos Jack Yakoub welcomed the youth to the fifth SYGG, he said: “Dear young friends, the most hope-filled result of this encounter will not be a final document, a joint letter or a program to carry out. The most hope-filled result of this meeting will be your faith and prayer. Each of you will return home with the new strength born from every encounter with one another and with the Lord”. Speaking about the theme of this year’s gathering – “Rooted in Him” – His Eminence said: “Wherever we may be and whatever we may do, we can always look up and say, ‘Lord, teach me to love as you have loved us, Lord teach me to be rooted and grounded in You’.” He concluded by thanking the organizing committee of the SYGG formed of members from the two youth organizations in the two dioceses in Sweden Soku and Souf.

Then, His Eminence Mor Dioscoros Benjamin Atas, Patriarchal Vicar in Sweden, gave a welcoming address in which he expressed his happiness to receive in Sweden His Holiness, their Eminences, and the youth participating in the gathering. He wished the youth a blessed and fruitful gathering, as well as all success in their lives.

At the end, His Holiness Patriarch Mor Ignatius Aphrem II gave the inaugural speech of SYGG 2019. He thanked the Lord God for the opportunity of being gathered for the fifth SYGG. He asked the blessing of God to all the youth. His Holiness thanked His Eminence Mor Anthimos Jack Yakoub and the organizing committee for their efforts in organizing the gathering. He emphasized the importance of unity despite the different views. “When we come to the Church” His Holiness said “we should always be one”. He added “there is a great need to strengthen spirituality in Sweden, especially among the youth”. He also spoke about the different projects that the Church is doing to enhance the participation of the youth in the life of the Church. He told the participants of SYGG 2019 that they are the Church, and without them there is no future. In connection with the theme of this year’s SYGG, Rooted in Him, His Holiness emphasized the significance of remaining truthful to the traditions of our Church and its history which teaches us how to preserve the orthodox faith, to live it, and to transmit to the next generation.

The choir of the cathedral and the “Kenoro d-Ruho” Choir performed beautiful Syriac hymns and songs throughout the ceremony.